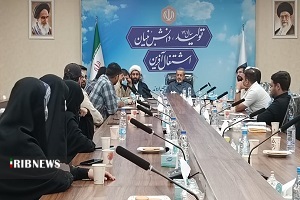 CEO of Arvand Free Zone said: Support for knowledge-based companies in the region will be done through creating Arvand Science and Technology Zone.
According to AFZ public relations and international affairs report: meeting of mutual thinking with group of student was held in AFZ’s organization this afternoon (8th of July).
Mohammad Reza Eskandari stated: Since its formation, Arvand Free Zone has not taken significant measures in scientific field .We are trying to create a science and technology area in the region, which requires to create science and technology campuses.
He Added: The AFZ universities generally have growth centers that have not been activated to cover the students and scientific elites. In this regard, we negotiate with Tarbiat Modares University.
Referring to the creation of scientific area in Arvand, after Tehran and Isfahan, Eskandari continued: after creation of Tarbiat Modares international campus in the region and admission of students from October this year, and approval of the board of trustees and negotiation with Tarbiat Modares, it was decided to support knowledge-based groups and companies.
The CEO of AFZ pointed out: It has been decided to create scientific and technological park to cover knowledge-based groups and companies and to apply the obtained knowledge in production and to implement the existing capacities in the region. He added: One of the major problems of knowledge-based companies is the provision of financial resources, which we must create a support fund to pay financial facilities.
Mohammad Reza Eskandari stated: It has been approved to establish two funds for northwestern and southern free zones which is done through correspondence and proposals. We requested that the centrality of the fund be in AFZ.
CEO of AFZ emphasized that with this project, the main shareholder will be Arvand Free Zone and said: This fund will be available for knowledge-based companies with cooperation of other shareholders and the schedule to achieve this issue will be in a period of 4 months.