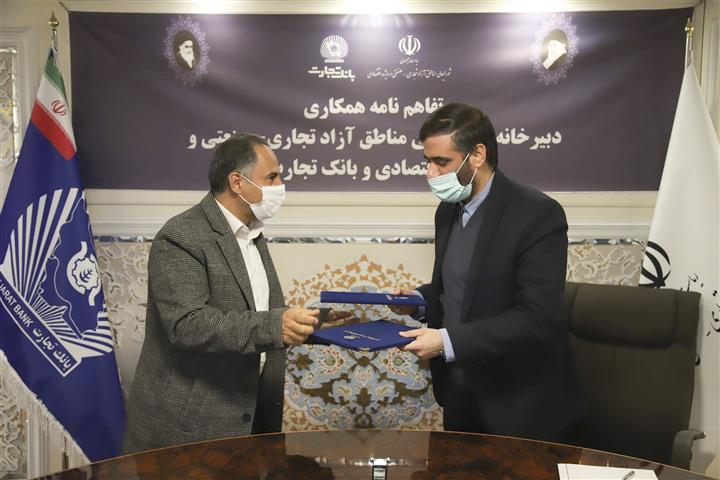 A memorandum of cooperation was signed between the Secretariat of the Supreme Council of Free Trade-Industrial and Special Economic Zones and Tejarat Bank of Iran with the aim of establishing and developing banking interactions, providing operational solutions and facilitating joint cooperation.
According to Arvand Free Zone Organization Public Relations and International Affairs Department, the Memorandum of Understanding was signed between Saeed Mohammad, Advisor to the President and Secretary of the Supreme Council of Free and Special Economic Zones, and Hadi Akhlaqi Feyzat Athar, CEO of Tejarat Bank, and a group of directors of the Secretariat of the Supreme Council and Tejarat Bank.
Mohammad elsewhere mentioned the provision and facilitation of financial resources for economic activities in the Free Zones of the country as one of the most central economic issues in these zones and said: in cooperation with Tejarat Bank and within the framework of current laws, regulations, rules and directives of the bank, as well as the rules announced by the Central Bank of the Islamic Republic of Iran and the laws of free trade-industrial and special economic zones and using new technologies, part of capital problems Investors and economic actors in the regions will be eliminated.
The CEO of Tejarat Bank also welcomed the creation of independent management for Free Zones in the organizational structure of the bank and said: Tejarat Bank is one of the banks that has more than 50% of its capacity allocated to large-scale national projects. For this purpose, for better management in Free Zones, a unit will be created in the corporate banking department to follow up on affairs.