Home News The visit of the Austrian Ambassador to Arvand Free Zone: Introduction of tourism capacities with the aim of collaborating 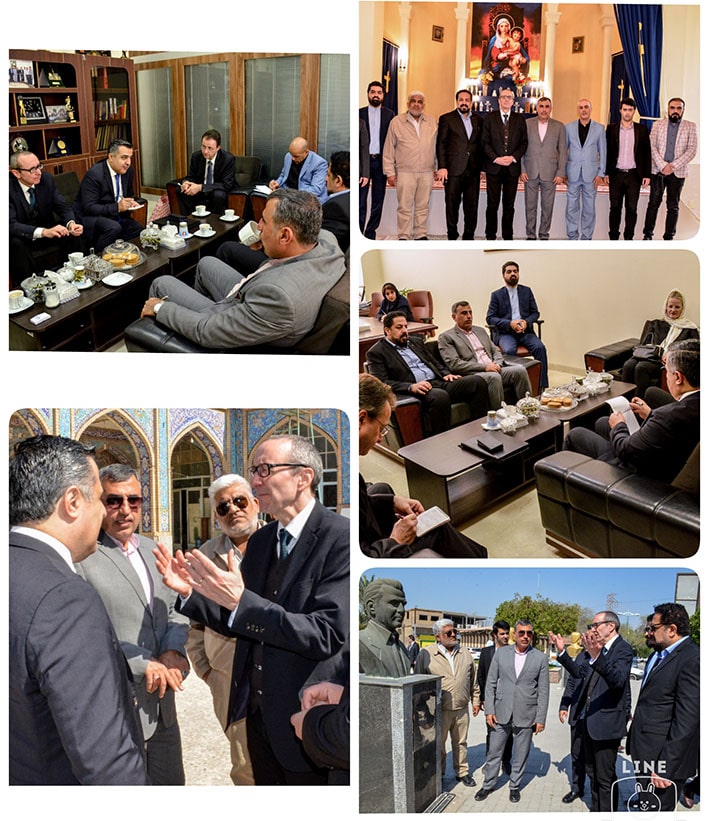 In line with introducing tourism capacities of the region and possible cooperation, a joint meeting was held with the presence of the ambassador of Austria, the Cultural, Social and Tourism Deputy and the Director of the Business Environment Improvement of Arvand Free Zone Organization.
According to the Public Relations and International Affairs department of Arvand Free Zone Organization; on the sidelines of the Austrian ambassador, Stefan Schlests, and the accompanying delegation’s visit to the Otto Wagner exhibition at the Museum of Contemporary Art in Abadan, a sincere meeting to introduce cultural, tourism and economic potentials of the region was held with the aim of joint cooperation at Arvand Free Zone Organization.
Referring to the unique and pristine atmosphere of Minoo Island as one of the tourism capacities, Director of businesses environment improvement of Arvand Free Zone Organization, said: Minoo Island with 2,400 hectares of land and green space is one of the most important parts of the region, with a high potential to develop tourism capacities. Jabbar Abbod Zadeh also said: investing in various sectors of tourism has long started the construction of several projects, such as City Center and Galaxy Center.
The Austrian Ambassador congratulated the 40th anniversary of the Islamic Revolution and thanked the support of Arvand Free Zone Organization, in particular the CEO for setting up Otto Wagner Exhibition and the opportunity created to visit the region. He added: Austria has always had high cultural potential as an opportunity to open up economic and industrial activities. We will definitely have other cultural projects that we would like to present to the organization’s cultural authorities.
He also spoke on the visit of the Iranian president to Austria seven months ago, during which the visit of Hassan Rouhani had called on them to travel more and more to the interactions between the two countries beyond the borders of Tehran, and one of the main reasons today being accompanied by the economic advisor of the embassy in Arvand Free Zone, is following the words of the President of Iran.
Stefan Schultz said: “According to your explanation, I am convinced that Austrian companies operating in certain areas of Iran can be considered for cooperation. The partnership in the field of tourism can be high among us, because Austria, with its 8 million population, has more than 120 million tourists each year.
He noted: We are studying and planning to hold an Austrian School tourism course with an Iranian university and our focus is on holding classes and training courses.
Pointing to the Austrian Ambassador’s short visit to Arvand, the deputy of cultural, social and tourism affairs of Arvand Free Zone said: “Considering the high tourism potential of the region, we will try to make the best introduction from the region.
Referring to the Austrian ambassador vision regarding tourism education, Ghodrat Allah Tamimian, noted, the organization is ready to consider one of the historic buildings of the region through a memorandum of understanding on the implementation of this plan, and if such agreement is reached, we will mutually educate our traditions in the fields of restaurant construction, local music and cuisine, in your country.
After the meeting, the Austrian Ambassador and the accompanying delegation visited Abadan Church and its outer area, where the martyrs’ statues is located, and met with the first Christian martyr Babak Khachaturian and paid tribute to the martyrs.